Pharrell Williams shed tears of joy after Ophra Winfrey showed him a montage of fan videos to his track 'Happy'. 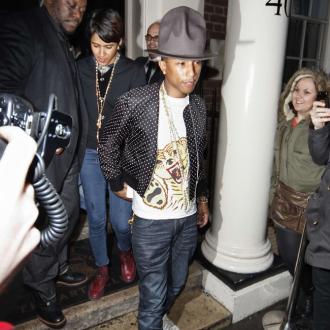 Pharrell Williams wept with happiness over his success during an interview with Oprah Winfrey.

The 41-year-old star was overcome with emotion after the 'Oprah Prime' host showed him a montage of videos from all over the world that people had made to his song 'Happy', and he admitted he couldn't believe how popular the track had become.

He wept as Oprah said: ''You know, I was just thinking about your grandmother. I bet she didn't even imagine that.''

After Pharrell joked, ''Why am I crying on Oprah?, she responded, ''It's being used for something that's greater than yourself. I get that.''

Pharrell then explained his tears and said: ''It's overwhelming because it's like I love what I do and I just appreciate the fact that people have believed in me for so long, that I could make it to this point to feel that.''

The producer was particularly delighted by the song's success as it had struggled to get any radio play before its release.

He said: ''Zero air-play, nothing. And the next thing you know, we put out the video on November 21 and all of a sudden--boom. I mean, when I say boom, I mean boooooom.

''And we were like, what's happening? First of all, people are putting up their own videos. It was like no longer my song.''

The legendary talk show host later admitted on twitter the exchange of ''sincere and humbling'' moments had made Pharrell one of her ''favourite'' ever interviewees, much to his shock.

He responded: ''You can't imagine what that means coming from you, a rare force. So radiant.''