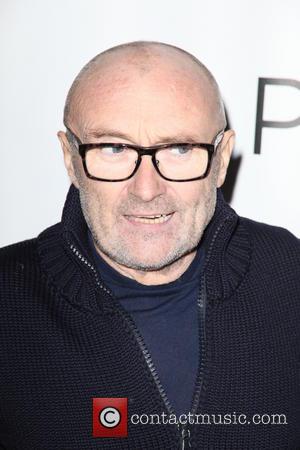 Veteran musician Phil Collins was forced to face his alcohol addiction and give up booze for good 18 months ago after he contracted a near-fatal bout of pancreatitis.

The Genesis legend has revealed he began drinking heavily after stepping away from the music industry in 2010 to spend more time with his family. Collins' boozing became so bad, he began attending Alcoholics Anonymous (Aa) meetings and spent a week in rehab, but he did not take his problems seriously until he was diagnosed with a severe case of pancreatitis, an inflammation of the pancreas which causes internal bleeding and extreme pain.

Collins insists his problems began after his ex-wife remarried and moved from Switzerland to Miami, Florida with the star's two youngest children.

He tells Britain's Event magazine, "I nearly died. I had pancreatitis... I'd retired to be with the kids... And really, retiring - well not working - and not having the kids, I guess left a big void... I was supposed to be an alcoholic... I went to meetings and I did try rehab - for a week. But I couldn't stand it. It was like being at boarding school. So I said to myself, 'I know what I need to do, I'm not a f**king alcoholic... I was taking medication for this (tendon problems) and for all kinds of different little things. (The prescription pills) were not mixing with the drink, basically... The kids were getting a little worried and that's what made me worried... I found myself a great doctor here in America, and I went to a couple of specialists. And I don't drink any more. And I've never fallen off the wagon. I've just been lucky."

Collins insists he never really thought of himself as an alcoholic and blames his heavy drinking on boredom, adding, "I put it down to just having a lot of time on my hands... In rehab I did go along with the 'Hello, my name's Phil and I'm an alcoholic,' because that's what I was there for. But I never really thought it myself. Otherwise it wouldn't have been so easy to stop... But I haven't drunk now for a year-and-a-half, a year-and-three-quarters. And I don't find it a problem, frankly."