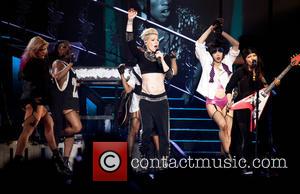 Picture: Pink aka Alecia Moore - Pink performing live at the LG Arena in Birmingham as part of her "The Truth About Love" World Tour -...

Pop punk Pink has apologised to fans in the U.K. after illness forced her to cancel a concert in Birmingham, England on Monday (22Apr13).

The So What hitmaker had been due to hit the stage for her second consecutive gig at the city's LG Arena, but took to her Twitter.com blog hours before showtime to announce that she was too sick to perform.

She wrote, "With deepest regrets I had to cancel my first show of the tour tonight in Birmingham. I have an ear and respiratory infection. I am not a person that takes cancelations lightly- and I apologize to anyone who was inconvenienced by my illness.

"Thanks to all my genuine people out there sending love."

Pink is next due to take her tour to London on Wednesday (24Apr13) to kick off the first of four concerts at the O2 Arena, although it is not yet known if she will be well enough to honour the shows.