Pink has posed nude in a 90-foot billboard which will go up in New York's Times Square to promote PETA's latest ''Rather Go Naked Than Wear Fur'' campaign. 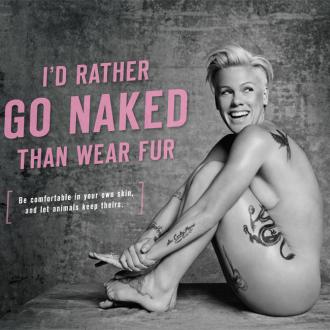 Pink will appear nude on a 90-foot Billboard in Times Square for PETA US.

The 'Family Portrait' hitmaker has stripped off in a new shoot for the animal welfare organisation's 'Rather Go Naked Than Wear Fur' campaign, which will be unveiled at the iconic Manhattan landmark this evening (11.02.15) ahead of New York Fashion Week, which begins tomorrow (12.02.15).

The 35-year-old singer regrets that she hasn't always been ''fur-free'' and now hopes to raise awareness of the ''horrors'' that animals go through in the name of fashion.

She said: ''I would like to say I've always been fur-free. Unfortunately, I went through a selfish phase and wore fur on a couple of occasions. But I wised up and now boycott fur completely. I wish everyone was forced to learn the horrors that these animals go through for fashion trends. I hope fur-wearers get bitten in the ass by the same kind of animal they wear on their back.''

Pink - who was shot for the campaign by Ruven Afanador - previously teamed up with comedian Ricky Gervais to lend her voice to an edgy CGI video for PETA UK targeting animal skins.

She follows in the footsteps of actress Eva Mendes, fellow singer Alexandra Burke and reality TV star Lucy Watson, who have featured in PETA UK's 'Rather Go Naked Than Wear Fur' series.

The campaign aims to raise awareness of cruelty to animals, who are often caged, beaten, electrocuted and skinned for leather, wool, exotic skins, fur and angora.