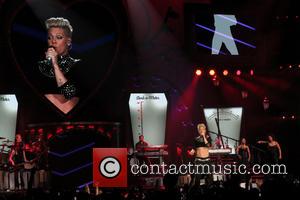 Pop star Pink has opened up about the biggest scare of her life - when her baby daughter tripped and suffered a concussion as she was learning how to walk.

The Who Knew hitmaker was in Las Vegas for her performance at the iHeartRadio music festival in September, 2012, when she took Willow, her first child with her motocross racer husband Carey Hart, to the pool.

The little girl fell on the concrete and bumped her head, requiring an emergency trip to the hospital, and Pink admits she has never been so frightened.

Recalling her worst parenting moment during an interview with Glamour magazine, she says, "When I was at iHeartRadio in Vegas. Carey was at a truck race or something. Willow and I were at the pool, and I was taking her to nap time. She was walking just a foot in front of me. And she trips and falls and gets a concussion. She passed out.

"Cut to an ambulance and fire truck. And a Cat (Computed Axial Tomography) scan. She was about a year old. That was the worst day of my life. And what do they say? 'Kids fall'. Welcome to parenthood. I thought, I can't handle this. I'm fitting her for a bubble."

And the Grammy winner admits she's constantly worried about Willow's safety: "Every time she bounces on the bed, I see stitches. Being a parent is a Jedi mind f**k. It's also the raddest thing ever."