Pink's husband Carey Hart doesn't get upset by her less-than-flattering portrayals of him in her songs - because he doesn't always listen to her. 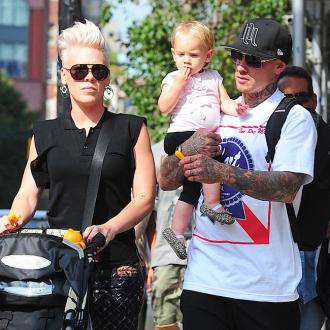 The 33-year-old singer often uses her marriage to Carey Hart as inspiration for her songwriting, and the motocross star doesn't mind that her portrayals of him aren't always flattering because he doesn't pay attention.

She said: ''He's like, 'Look, I know you, we have a good sense of humour and I know what I signed up for. I only listen to half of what you say anyway. When he starts listening to be too much we have problems.

Pink - who has daughter Willow Sage, 19 months, with Carey - also revealed her hangover cure is to drink a beer ''as soon as possible.

The 'Here Comes The Weekend' singer admitted she can't drink wine anymore as it makes her ill the next day so she tries to stick to beer instead.

Asked for her hangover cure, she told People magazine: ''Drink a beer as soon as possible. I used to be able to drink a bottle of wine and not get a hangover. Now, after two glasses I have a headache.''