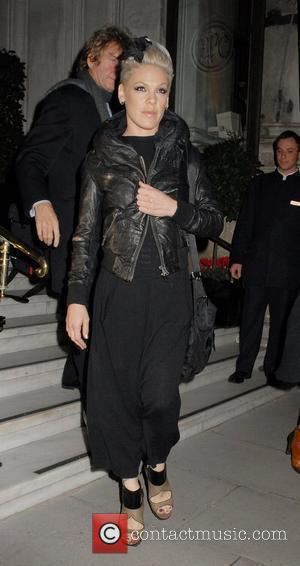 Avid animal rights advocate Pink is still angry with Prince William for failing to reply to her letter questioning his love of hunting - branding the future British monarch a "redneck".
The So What! hitmaker famously penned a cutting note to the prince after he invited her to play at his 21st birthday celebrations in 2003. In the letter, she refused to perform at the lavish bash and instead quizzed him on why he chose to kill animals as a hobby.
Pink has previously lashed out at the royal for not answering her questions, and has gone a step further by comparing him to a "redneck" - an offensive American term for a low-class, white male.
The singer tells Q magazine, "I wrote to him to protest about foxhunting and I figured he would be this stuffy, privileged a**hole. But he's like a redneck from the south. If you're brought up shooting and hunting animals, if you really think it's second nature and you're blasting away then it's hard to see the other point of view. You need educating."
Pink also took the opportunity to take another swipe at William's grandmother, Queen Elizabeth II, who also failed to reply to a letter she sent asking for her to stop using bearskin for her guards' hats.
The singer adds, "To be truthful I was really surprised I didn't get a reply to that one. I wasn't just writing in and complaining, and it certainly was not a publicity stunt. I actually proposed a plan. Stella MCCartney had designed these replacement hats for the guards using fake fur. I felt we were solving the problem for her and offering a viable solution.
"But she never wrote back. Maybe she doesn't have any of my stuff on her iPod."