Pink - who became a mother for the first time five months ago - wants to have ''lots and lots'' of children with Carey Hart. 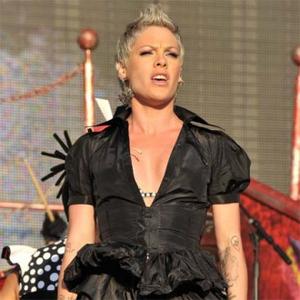 The singer and husband Carey Hart became parents five months ago when she gave birth to daughter Willow Sage, and the 'Raise Your Glass' hitmaker is already thinking about expanding her family further.

The 32-year-old star also revealed Willow is already a fan of her music and settles down when she hears her mother sing.

"I sing 'You Are My Sunshine' and I make up songs for her because I'm goofy."

However, Pink admitted she is trying not to let motherhood set the tone for her next album.

She said: "I promised my fans I wouldn't write an album full of lullabies. So I'm swallowing that as we speak."

Pink recently revealed she and Carey had named their daughter after an "unbreakable" tree because they liked the meaning behind the moniker.

She said: "It is the most flexible tree and nothing can break it - no wind, no elements. It can bend and withstand anything. I love that sentiment and I want that for her.

"Sage is cleansing and sacred and it sounds great with Willow. It doesn't hurt that her last name is Hart - flexible, cleansed heart."