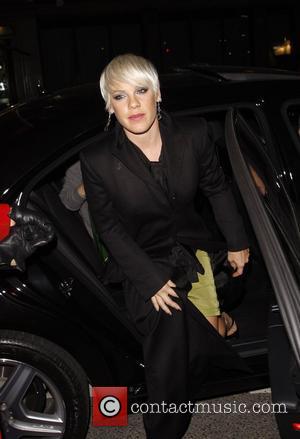 Picture: Pink aka Alecia Moore arriving back at her hotel London, England - 04.11.08

Pink has picked up the first award of the night at the 2008 MTV Europe Music Awards - winning the Most Addictive Track gong for her breakup anthem SO WHAT.
The show kicked off with a rousing performance from rapper Kanye West, who was joined onstage by British rapper/singer Estelle.
Pop punk Pink was subsequently announced as the first winner, beating off competition from the event's host Katy Perry to win the accolade and collecting the prize from U.K. girl group Sugababes.
The star is also up for Album of the Year and will take to the stage to perform.
The second award of the evening was presented to German rockers Tokio Hotel, who picked up the Headliner prize from singer Anastacia.
Other performers set to thrill fans at host city Liverpool's Echo Arena include Pink, U.S. rockers The Killers and British boyband Take That - who performed at the first ever MTV EMAs in Berlin in 1993.
U2 frontman will present Sir Paul MCCartney with the Ultimate Legend award - a one-off accolade to coincide with this year's (08) ceremony being held in his hometown.
And fans can expect a battle between the world's biggest female stars, with Britney Spears, Alicia Keys, Leona Lewis and Duffy all competing for the coveted best album gong.
Spears, who is up for three awards at tonight's event, is expected to win big after she swept the board at September's (08) MTV Video Music Awards in Los Angeles.
Other superstar nominees include Kanye West, Beyonce Knowles, Amy Winehouse, Rihanna and Coldplay.