Pink Won Over Carey Hart With Sexy Presentation Of Scrapbook 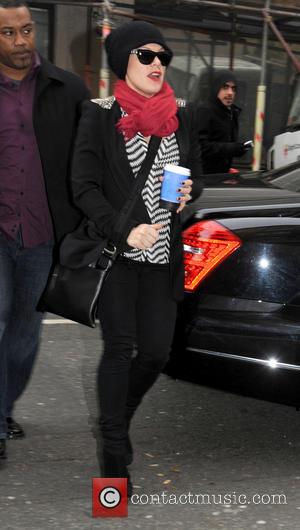 Pop star Pink won back her husband Carey Hart after their trial separation by wearing his favourite bra and panties and presenting him with a homemade scrapbook.

The Raise Your Glass hitmaker split from Hart in 2008, after just two years of marriage, but the devastated singer refused to give up on their relationship and flew to Las Vegas 11 months later in a bid to reunite with the motocross star.

And the 33 year old reveals her master plan to win back his heart worked like a charm.

She tells Redbook magazine, "Eleven months after we broke up, he asked me to fly to Las Vegas to perform on New Year's Eve at his club. I wanted to see him. And I looked hot. There's something about breaking up with someone - you just look hotter than you ever did before. I will never look as good as I did those six months after we broke up. Never!

"Anyway, after sound check I told him that he needed to come to my room. I had made him a photo album of all the cards he had ever given me, of all the photos of our entire relationship. I spent months on this album. On the last page, I pasted a photo of me from a really bad movie I made years ago with my neck slit and blood everywhere. Next to it I wrote, 'This is me without you.'

"On the next page, there was a picture of a baby. And I wrote: 'The rest is unwritten.' The divorce papers that we never signed were behind that page. I was like, 'The rest is up to you.' And I did all of this in his favorite bra and panties."

The couple has been together ever since and became parents to daughter Willow in 2011.