The third film in the hugely-successful Pirates Of The Caribbean franchise has received its premiere in Los Angeles.

Stars Johnny Depp and Orlando Bloom were present at the At World's End gala event, held at Disneyland in a nod to its theme park ride origins.

The first two films in the series took more than $1 billion (£500 million) at the global box office, with At World's End expected to break the recent opening weekend record set by Spider-Man 3 when it goes on worldwide release on May 24th.

Depp reprises his role as Jack Sparrow in Disney's latest film, with the pirate captain finding himself in a spot of bother at the end of its precursor, subtitled Dead Man's Chest.

Rolling Stones guitarist Keith Richards, who Depp based his Oscar-nominated portrayal on, makes a cameo appearance in At World's End as Sparrow's father. 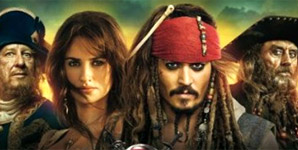