Pond (Formed 2008)
Pond is an Australian psychedelic rock band from Perth. Although the members are constantly changing, the current members are Nick Allbrook, Jay Watson, Joe Ryan, and Jamie Terry.

Formation: The band formed in Perth, Australia. The original members were Nick Allbrook, Jay Watson, and Joe Ryan. The original idea for the band was for it to be a project where they could get anyone they wanted to play whatever they wanted, at any time.

Musical Career: In January 2009, Pond's first album was released. It was called "Psychedelic Mango". In just five days, a live 8-piece band created the bands' second album, "Corridors of Blissterday". It was released in June 2009. Their third album "Frond" was released in May 2010. "Beard, Wives, Denim" was released in March 2012, after the success of Tame Impala's 2010 album, "Innerspeaker". Pond actually shares three members with Tame Impala. In 2012, Pond toured the US. In 2012, they performed at festivals, including SXSW. NME named Pond "The Hottest New Band In The World" in May 2012. In June 2012, 'Can' frontman Damo Suzuki (One of Pond's biggest musical inspirations) performed with the band as a one-off show. Their album "Man, It Feels Like Space Again" was released on 23rd January 2015. 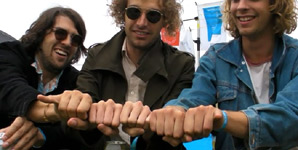 Hailing from the land of Aus are the floppy-haired psychedelic rockers Pond. Made up of three members of Kevin Parker's Tame Impala, Pond have had quite a prominently successful show at America's SXSW Festival on their US tour and the March release of their fantastic unusually-named debut album 'Beard, Wives, Denim' has already received critical acclaim.

Pond - You Broke My Cool

Not to be confused with the now defunct Portland, Oregon group of the same name, Pond is a group of psychedelic pop crusaders hailing from Perth in Western Australia. 'You Broke My Cool' is the latest single/video to come from the Aussie five-piece and features on their latest release Beard, Wives, Denim - released through Modular Recordings.

Continue: Pond - You Broke My Cool

With Australian outfit Pond sharing three members with fellow Aussies and psychedelic rockers Tame Impala, a comparison was inevitable. With a back catalogue of three albums since their formation in 2008, Pond still chose a homemade, undeniably garage approach for their fourth effort, 'Beard, Wives, Denim'. 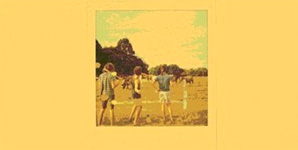 Pond - Sitting Up On Our Crane Video Pond - You Broke My Cool Video