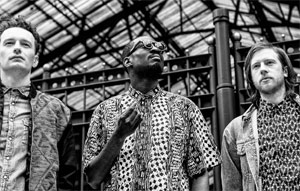 'Fires In The Park' is a testament to the band's maverick nature, refusing to comply to any set of rules or genre whilst remaining consistent to itself, in sound and character; from the moody, introspective heady bass-ness of 'D.A.M' to the kwaito-baiting 'Faithless' to the funkpop album finisher 'So You Say'.

Benin City is a rainbow of multiple tempo changes and mood flips, idiosyncratic yet familiar in all its guises, fresh sounding yet original. Joshua Idehen cut his teeth in the London spoken word scene, and his narrative/lyrical chops are evident. Royal Academy of Music alumni Tom Leaper's faceted horn/synth arrangement is reoccurring motif; catchy and multi-faceted, revealing new aspects with repeated listens. Theo Buckingham, drummer and co composer, brings his drum n bass/dubstep producer experience to play, giving the album its vibrant, often marching and sometimes dark persona. The synths interact with the horns to create a sound that is hard and bright; the traditional instrument being made to sound more metallic, more befitting of the urban sprawl Benin City's tales are set.