Posted in Press Releases on 20 February 2014 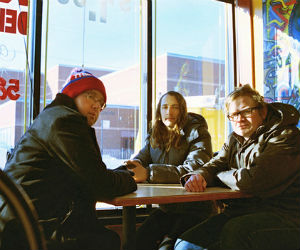 Michigan three piece CHEAP GIRLS can announce further details of their forthcoming album. 'Famous Graves' will be out on 12th May 2014 around the world, excluding North America when it will come out a day later on 13th May 2014. It's the band's first record for Xtra Mile Recordings (Against Me!, Frank Turner, Tim Barry) and the label's first full worldwide release.

Famous Graves was recorded in Chicago and Grand Rapids by Rick Johnson (who recorded Cheap Girls' first two records, 2008's Find Me a Drink Home & 2009's My Roaring 20's) and Jeff Dean (The Bomb, Dead Ending, All Eyes West). Recorded over 3 months, the band self-produced the record and mixed it with the assistance of Dean.  The follow-up to their 2012 release Giant Orange, Famous Graves sees the band continuing to grow their authentic Midwestern rock that's drawn comparisons to bands such as The Lemonheads, The Replacements, and early Smoking Popes.

With tours in the States confirmed with label mates Against Me! and The Hold Steady, and with plans being made for a summer of festivals plus a full UK and European run ear-marked for Autumn - Cheap Girls are set to have a fantastic 2014.

Against Me! The Hold Steady