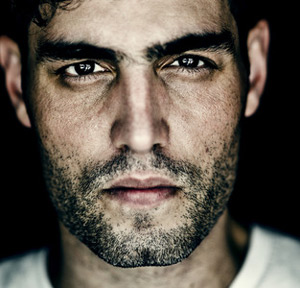 On Me Moan Daughn Gibson truly reveals himself and the scale of his talent. If All Hell was black and white, Me Moan is not just Technicolor but a widescreen IMAX 3D blockbuster. While the roots of sample-based music remain, these songs and every piece of music on them is performed live, lushly detailed and richly orchestrated. While taking in everything from live drums, pedal steel and horns, to house strings, organs and even bagpipes, it never feels over stuffed, with every instrument or melody in its rightful place. Elsewhere, guitarists John Baizley (Baroness) and Jim Elkington (Brokeback) provide stunning performances.

Me Moan takes the listener on a journey as seen through Daughn's eyes, with stories and characters that are distinctively Noir-ish. You'll throw caution to the wind during 'Kissin on the Blacktop', pairing a stadium chorus to a bath-salt addled riff about a dive bar where "people buy drugs, consume them in the bathroom and just might be late for dinner", then nurse your hangover with 'Into the Sea'. You'll protect your loved ones against 'The Pisgee Nest' a track Daughn describes as "a pulsing woozy song about an incident in the woods that I heard about some years ago and it disturbed me to the core", then hold them close during 'Franco', a companion piece to 'Ray' from the debut album; "a song I could barely sing in the studio because it kept making me choke up, about a father who desperately wants his wife to emerge from the grief of her son's suicide". You'll also send 'Phantom Rider' after your enemies and feel remorse alongside 'All My Days Off'.

Daughn will play a special show in London at Birthdays on 28 May, after stopping off at Primavera Sound festival in Barcelona.