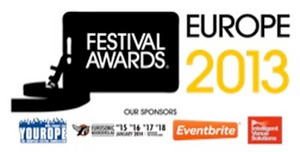 The best music festivals, artists and promoters of 2013 were revealed at the 5th annual European Festival Awards, which took place at Groningen's De Oosterport in The Netherlands, marking the opening night of Eurosonic Noorderslag. The ceremony also included some of the hottest new European artists with performances from Irish band of the moment Kodaline, Germany's Milky Chance and Prata Vetra from Latvia who closed the show.??

Germany proved it is a force to be reckoned within the festival scene, scooping a total of 5 awards; Best Indoor Festival going to Metal Hammer Paradise, Berlin Festival won Best Line Up, Melt! Festival gotBest Medium-Sized Festival with the two most important industry-facing awards Promoter of the Yeargoing to FKP Scorpio and the Lifetime achievement Award to Marek Lieberberg, founder of the twin Rock Am Ring and Rock Im Park festival.??

The host country of the awards also scooped an award with Holland's Lowlands being named the Artists' Favourite Festival.

Artists were also recognised for their contribution to the European festival scene with the UK's Arctic Monkeys winning the award for Headliner of The Year, Newcomer of the Year went stateside to Las Vegas band Imagine Dragons and the Festival Anthem went to Daft Punk for 'Get Lucky' with the one and only Nile Rogers recording a special thank-you message for the show.

James Drury, MD of Festival Awards Ltd, which organises the Awards said: "Festivals are immensely popular with people across Europe and it's been a delight to toast the achievements of a great 2013 with the best in the continent. A huge congratulations to all the winners, and to all those finalists. It's a great accolade to make it into the top 10, as we had hundreds of festivals take part this year."

Christof Huber, YOUROPE, adds: "It's great to see how the awards have grown over the past 5 years and to see so many festivals taking part, which is testament to the thriving European festival scene."

Presented in association with YOUROPE and Eurosonic Noorderslag the European Festival Awards are the only pan-European body solely dedicated to recognising the contributions and achievements of the event organisers and performing artists that generate billions of Euros for local economies and brighten up the summer for tens of millions of festival-goers each year.

This year the winners were decided by a combination of public votes and the EFA jury - made up of journalists, booking agents, festival organisers - who had a 25 per cent say in the final outcome of the public voted categories. More than 620,000 votes from festival fans all over the world we cast, showing that passion for festivals across the continent continues to grow.?

Festival Anthem of the Year
Daft Punk - Get Lucky

Newcomer of the Year In association with Eurosonic Noorderslag
Imagine Dragons

Headliner of the Year
Arctic Monkeys