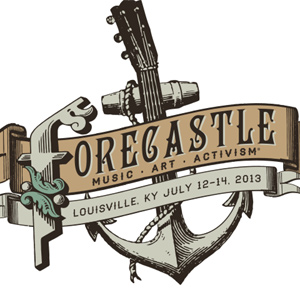 The Flaming Lips, Alabama Shakes, Animal Collective, Old Crow Medicine Show, Grace Potter & the Nocturnals, Big Boi, Matt & Kim, Purity Ring and more than 50 others will round out the lineup. Louisville native Jim James, whose band My Morning Jacket headlined and curated the festival in 2012, will return with his new solo project. A full list of confirmed acts can be found below.

In addition to performances at Waterfront Park, the Forecastle Festival will feature late night shows on the historic Belle of Louisville steamboat and other landmark locations throughout downtown Louisville. Jam masters The String Cheese Incident will perform an exclusive, separately ticketed late night show at Louisville's historic Palace Theater on Saturday, July 13.

Highlighted in Rolling Stone as a top event in 2012, and acclaimed by Outside as one of the "Top 15 Outdoor Festivals in the USA," the Forecastle Festival has evolved into one of the country's premier festival destinations. The event offers an immersive experience that's distinctly Louisville- beyond the first-class musical lineup-highlighting the region's burgeoning culinary and arts scene, Kentucky's unique bourbon heritage and more. The festival continues to emphasize sustainability practices and conservation initiatives, highlighted through the festival's non-profit organization, the Forecastle Foundation.

Weekend passes for Forecastle 2013 will go on sale this Wednesday, March 6 at noon EST at Forecastlefest.com, Ticketmaster.com and all Ticketmaster outlets.

Single day passes and late night show tickets, along with the daily schedule of artists and late-night events will be available in April.