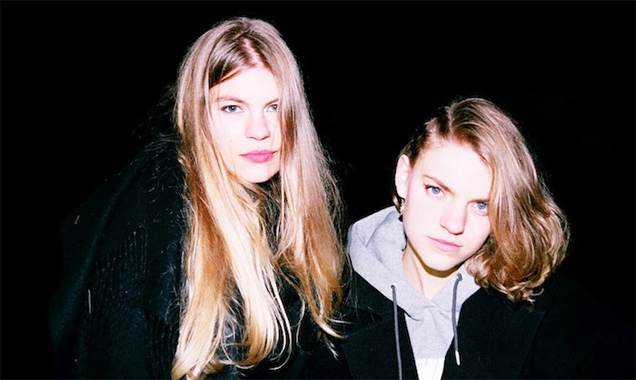 Hockeysmith are Annie & Georgie Hockeysmith, two sisters who spent most of the last year living and making music in a caravan on a farm in Falmouth, Cornwall.

In need of more room to live and record the sisters recently traded the caravan for an old tour bus and now they count members of Hawkwind as neighbors on the farm.

The past few months have seen them making a name and piquing interest for their exploratory sonic palette, hauntingly idiosyncratic songs and pulsating, strobing live shows, which has led to features and profiles by outlets ranging from The Fader and Interview Magazine to Dazed And Confused, SPIN and The Guardian.

Following an acclaimed 12" debut single on their own Backabelly label and a recent beacon with the track and video for 'But Blood', Hockeysmithnow announce the details of their forthcoming debut EP of the same name. The But Blood EP will be released May 26th on Double Denim Records, the label that has unearthed talents such as Empress Of, Brolin, Outfit and Amateur Best.

From the mood-heavy intro of 'Phantom Whistle' to Annie's frantic Roland 303 acid riffs dueling with Georgie's swirling Telecaster feedback and sub-bass rumbling on 'But Blood', to the wistful acoustic cyborg hymn of  'Meanwhile' and driving drums and electro eruptions which backdrop the yearning, bewitched refrain at the heart of 'Hesitate', there is something ever special and exhilaratingly unpredictable at work.