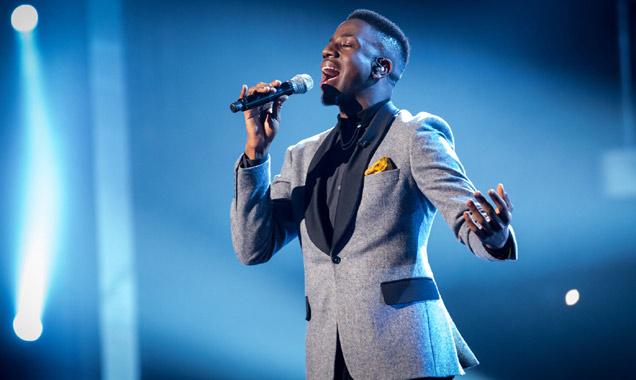 When presenter Marvin Humes announced the result, Jermain, coached by Will.i.am, was visibly shocked and overwhelmed.

Jermain Jackman said: "I want to thank Will for everything he has done for me over the course of the last few months, you have been the best coach ever.  I want to thank God for all the opportunities that I've had.  I want to thank all my family and friends.  This is not just an achievement for me but an achievement for every single person round the world, especially in the UK, who has had a dream, worked hard for that dream and achieved that dream.  I want you guys to know, work hard for that dream and you will achieve it."

Coach will.i.am said: "You have a lot of work to do.a lot of focusing. To say that claim, 'I want to be the first black Prime Minister' a lot of people when you say things like that are going to giggle and turn away thinking 'ha ha ha that's cute'.  But, you can prove people wrong.  To go out and put yourself in that situation, to where you want to do work in your community, that's a lot of hard work and focus and dedication, but surround yourself with the right people. So I hope you know, this victory is more than just you singing, this is like direction and guidance for the rest of your life."

The Voice UK Final opened in spectacular style with superstar coach Kylie Minogue descending on a pair of neon lips to join fellow Coaches will.i.am, Ricky Wilson and Sir Tom Jones on stage to perform a stomping version of Rocks by Primal Scream.

Then it was the turn of the artists to take to the stage each performing a new song not seen on the series before. Christina-Marie sang Coldplay's anthemic hit Fix You, Sally Barker sang Both Sides, Now by Joni Mitchell, Jermain sang Wrecking Ball by Miley Cyrus and Jamie Johnson performed Missing You by John Waite.

Once the voting lines opened, each Coach took to the stage with their finalist in show stopping duet performances.  Christina-Marie performed Coming Home with Ricky Wilson and the Kaiser Chiefs.  Sally Barker performed Walking In Memphis with legend Sir Tom Jones whilst Jermain Jackman performed Pure Imagination from Willy Wonka & the Chocolate Factory.   And last but by no means least, the final duet of the night came from Kent lad Jamie Johnson alongside Kylie Minogue, performing There Must Be An Angel by Eurythmics.

First to leave the competition was Jamie Johnson and the remaining three finalists took to the stage once more to perform their favourite song of the series.

Christina Marie performed The Power Of Love by Frankie Goes To Hollywood.  Sally Barker performed Dear Darlin' by Olly Murs and finally Jermain Jackman performed And I Am Telling You by Jennifer Hudson.

After the final songs had been performed and the votes had been counted, Marvin Humes announced that Jermain Jackman was the winner of The Voice 2014.  Jermain then took to the stage for a final emotional performance of And I Am Telling You by Jennifer Hudson to close the show.

Viewers were also treated to performances by Paloma Faith and Aloe Blacc.