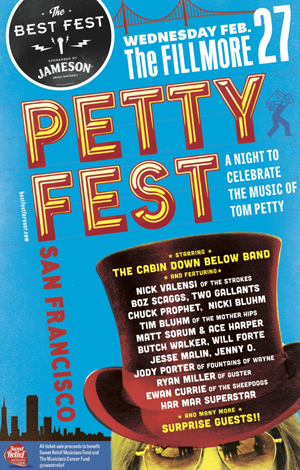 The Best Fest, proudly sponsored by its favorite spirit Jameson® Irish Whiskey, is thrilled to announce the addition of Aimee Mann, Catherine Pierce of The Pierces, Danny Masterson & Adam Busch, Parker Gispert of The Whigs, Two Gallants and Paul Sprangers of Free Energy to the Petty Fest San Francisco lineup for 2013.

On February 27, The Petty Fest concert series will expand to The Fillmore in San Francisco for the very first time thanks to Jameson® Irish Whiskey's involvement. Jameson has also made it possible for The Best Fest to donate all of the ticket proceeds to Sweet Relief Musicians Fund, a charity that provides financial assistance to musicians facing illness or disability.