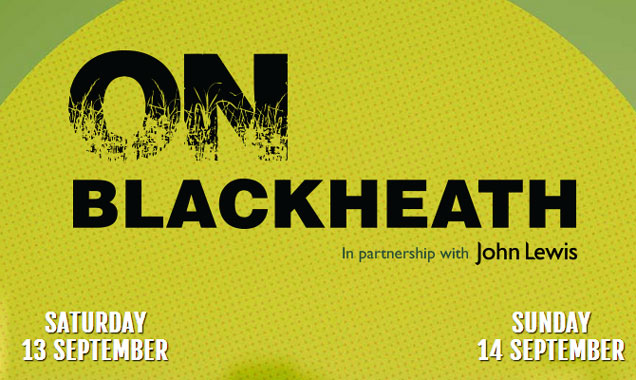 OnBlackheath in partnership with John Lewis is a brand new music festival with a difference. An eclectic music line-up, immersive food experience, farmers market and much more will be on offer. OnBlackheath will be taking place over the weekend of Saturday 13 and Sunday 14 September 2014 on the historic green space of London's Blackheath Common SE3. Headlining the event, and what will be both their ONLY London festival shows this year, iconic music pioneers Massive Attack (Saturday) and punk folk rocker Frank Turner & The Sleeping Souls (Sunday). All other Main Stage artists are due to be announced shortly, with the second stage being curated by national radio DJ Gilles Peterson on the Saturday and independent label Heavenly Recordings on the Sunday.

If that wasn't enough to whet your appetite OnBlackheath are delighted to announce the unique addition of our special food stage host, pop-up chef and The Sunday Times Cook, Gizzi Erskine. 'Gizzi's Chef's Club' which will offer festival visitors a chance to sample the dishes demonstrated on the main food stage. The stage will provide an interactive experience for festivalgoers where 8 chefs a day will showcase their latest cooking skills and trends with fresh, sustainable and local produce. The chef line up will include Michelin starred chefs Simon Hulstone (The Elephant) & Richard Bainbridge (Morston Hall) and top chef Neil Rankin (Smokehouse)

OnBlackheath have teamed up with Harvey Goldsmith for this sensational festival. Harvey Goldsmith said, "This is a true London festival committed to a weekend brimming with entertainment. We are delighted that Massive Attack are working with us to curate the line up on Saturday and that the brilliant Frank Turner will be heading up the Main Stage on Sunday. South London needed a premiere annual event and this is the first of its kind, in a fantastic landmark location. We are thrilled to have John Lewis as our partner appealing to both their customers and the London music audience."

Craig Inglis, Marketing Director at John Lewis, said: "We are really excited to be launching OnBlackheath, the first music and food festival on Blackheath Common. With so many amazing artists and hugely talented, renowned chefs showcasing their cooking skills, we're sure it's going to be a very special weekend".

Frank Turner, who will be headlining the festival on Sunday with his band The Sleeping Souls, has had a huge cult following since he embarked on a solo career in 2005 when he left the punk band The Million Dead. The folk-punk singer has had recent hits with the catchy singles 'The Way I Tend To Be' and 'Recovery' from his 2013 album release Tape Deck Heart, and performed to billions around the world when he performed at London 2012's Olympic Opening Ceremony.

Throughout the weekend festivalgoers will get the chance to see more world-class artists perform, with the addition of the second stage. National radio DJ Gilles Peterson will be bringing an array of live music and DJ sets to his Worldwide Stage on Saturday 13 September with the likes of Hiatus Kaiyote, BadBadNotGood, Swindle Live, Ibibio Sound Machine, Zara McFarlane, Anushka with DJ slots to be announced soon.

Leading independent label Heavenly Recordings will curate the second stage Heavenly & Friends on the Sunday with artists including Radiophonic Workshop, Stealing Sheep, Charlie Boyer and the Voyeurs, The Wytches, Kid Wave and a DJ set from Don Letts.