BBC Radio 1 presenter Fearne Cotton was another guest at the launch, heavily pregnant and supported by her boyfriend Jesse Wood, the son of Rolling Stones guitarist Ronnie Wood. Despite being on maternity leave, she took a break from resting to attend the event and looked 'pretty green' in a patterned turquoise and black minidress teamed with leopard print ankle boots that cleverly took the attention away from her bump. Though, as a fashion designer herself, you can hardly blame her for knowing all the tricks of the trade. Liam Howlett from The Prodigy paid tribute to the label with a thin green scarf while his wife Natalie Appleton (also from All Saints and sister of Nicole) turned heads in a net top and tight leather pants. It certainly wasn't a night for conventional red carpet glamour but was dazzling nonetheless. The range of different styles donned by the evening's celebs went some way to prove a point Gallagher made about his clothing not fitting into one category, as inspiration seems to be everywhere. 'People might say it is but we didn't set out to create a Mod label', he insisted. 'It's music, from the Sixties and Seventies.' 'The Inbetweeners' star James Buckley was also in attendance looking chipper as usual. He hung up his role as the egocentric though secretly insecure character of Jay from the British comedy series in 2011 following a three series run and a closing movie. In November last year (2012) he married his long-term girlfriend Clair Meek at Dundas Castle in Scotland and the pair have a 14 month old son together named Harrison. Whether he's named after Blake Harrison, the actor who played Jay's best friend in the series, is unknown  though we'd sort of like that to be the case. 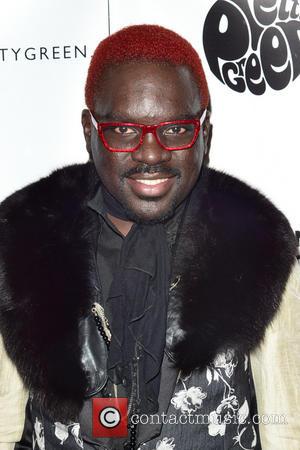