They say the Spanish are a race of people who wave their hands and say 'mañana,' at organisation. 'They' have obviously never been to Primavera. Set in a stylish suburb of an even more stylish city, Primavera Sound runs with a ruthless efficiency. It's like a nuclear clock. Upon arrival, for instance, rather than just a mere wristband, you are presented with a swipe card and scanned in like a piece of fruit at the supermarket. If you get lost there are kiosks to borrow mobile phones, I don't queue longer than 3-4 mins for a beer, and I don't see one band taking the stage later than they should. Amazing really. 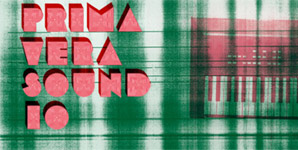 The usual tedious "ticket for beer" system which accompanies festivals in Europe is taken to a new level of confusion, where you have to specify precisely what kind of drink you want as well. On one hand, it's pretty annoying planning out an evening's drinking in one go. However, after the night has taken its toll, and you forget every bit of Spanish you've learned, it's handy to be able to hand over a magic slip which says 'give me a beer!'

The Forum site, though clinical, is somewhere between a spaceship and where The Jetsons might park their flying cars: lots of tarmac, concrete and wildly angular roofs. You might not appreciate the rigid futurism but it's certainly impressive. There are lots of spacious terraces and wide sweeping seated areas, so actually seeing bands is never a problem. As there's no camping onsite, and the toilets are well maintained, Primavera offers a more discerning experience than your average mudbath. Whilst you may pass out on the floor drunk if you like, it's not de rigueur.

So, enough of the practicalities. The bands are the main reason the people come in droves, and with collaborations from Vice, ATP and Pitchfork, 2010 was a particularly fine year for this already hyped event.

Thursday felt like a relatively quiet start to the festival, with a thinner crowd than the weekend headliners would draw. But there was still fun to be had, beginning early around the Pitchfork Stage.

Surfer Blood were first up. The adorably cute, adorably young Floridians were the perfect frame for a sunny evening, and they drew/kept a sizeable crowd. It was lovely, but the ante was most definitely upped next for Titus Andronicus. Having seen their fist fight of a gig earlier last week, sitting out was not an option. The crowd churn up into a grinning, air punching frenzy, and despite Patrick Stickles' thousand yard stare, TA exude pure joy.

In contrast, at the Ray Ban amphitheatre, The XX came across exactly as they do on record: quite pretty, morose and sterilised. They intersperse a little of '9pm (till I come)' into their set, at least hinting at a sense of humour. But all the smoke and affectations come over a little bit chilly in the warm night air. Brrrrrr.

The evening's sudden lull means it's up to Pavement to bring everyone round. Now, as a half-baked fan, when they kick off with 'Cut Your Hair,' I have visions them disposing of their popular stuff early and playing a set of b-sides. But it's pleasing to find the set is brimming with the best from Slanted and Enchanted and Crooked Rain, Crooked Rain. As godfathers of Slackers everywhere, their sound is - dare I say - tight? A huge appreciation swells to a crescendo which seems almost stupid: people are ballroom dancing by the end.

Despite the well documented dislike that flows between them, Pavement are affable and fun together on stage. Closing on the magnificent 'Stop Breathin',' Malkmus nails it with a smile on his face. A lovely, bizarre turn out for the books.

Friday's line-up was a little more heavy duty, and required a slightly later start to keep awake/alive for Diplo at 4:45am (!)

CocoRosie remind the crowd of how the likes of Florence and the Machine are desperately trying to hang onto their coat tails. Only they do it a miles better, and have been doing it years before Flo even went near a net curtain. With inexplicable stripes down the side of their heads, their stage show is wonderfully ethereal, and equally mad. But all this high art leaves me yearning for something a little dumb. Step forward the Japandroids. Sometimes a conversation is nice, but sometimes, all you want is a good-looking one night stand. Wickedly enjoyable and tongue in cheek, as they thrash and pogo their way through 'Heart Sweats' and screech about kissing French girls, I find myself throwing shapes which are never going to result in French kissing.

Few bands can garner a reaction from a crowd like Pixies. At the Indie Circus, then they are the ringleaders. Frank Black's endless enthusiasm is heartening, and whether you're a fan or you're not you have to admit, they know exactly when to roll out 'Broken Face.' Their set is song after song of sweet nostalgia: 'Monkey Gone to Heaven,' 'Wave of Mutilation,' 'Gigantic' and 'Holiday' punctuate obscure treats for the sardines crammed in at the front. I am smitten: the highlight of a weekend filled with highlights.

Maybe it's the huge crowd facing or the wind-exposed Vice stage, but Yeasayer's set is difficult to hear.That's not a problem Diplo has, who has enough bass to awaken those at the other end of Barcelona. As he ascends to his throne, a dubstep version of a song from The Lion King pipes out. Who cares? He could probably lead with the Benny Hill theme tune and the crowd would still lap it up. It's this sort of dance music that makes it fun to grind the night away, and when Friday wraps up at 7am with a mammoth remix of MIA's 'Paper Planes,' everyone in the place is shooting their fake guns like idiots.

Saturday is a little drawn out. Atlas Sounds does his best to fill Pitchfork, but he's only one man with an acoustic guitar. Songs like 'Sheila' and 'The Light That Failed' are as lovely and as earnest as ever, but without Deerhunter behind him, Bradford Cox cuts a lonely figure on an empty stage.

Dum Dum Girls perk things up nicely around midnight with their short, sharp, bubblegum punk. Channelling early Donnas and the more abrasive end of Vivian Girls, they give their debut album 'I Will Be,' a good airing, and are so quality live that people walk round asking who they are.

Saturday wraps up the night of the never-ending Pet Shop Boys set, which though visually thrilling, descends into farce. A good camp send up is never amiss, but by the time the Benetton Advert/Pan People dance their way through 'Why Don't We Live Together?' 2 1/2 hours later, my interest is waning. The robot block head dancers are worth a mention, though, hilarious.

The sheer volume of bands at Primavera and its one-of-a-kind set up could take up a few more thousand words than this. Probably a few thousand more after that. The truth is it can be any sort of festival you choose: you could make it a stamina-testing marathon, cramming in every act possible. Or you could chill out and spend your time enjoying the beautiful city of Barcelona. Its unique personality is stamped all over Primavera, which is the city's relaxed, good time spirit is distilled into a single weekend.