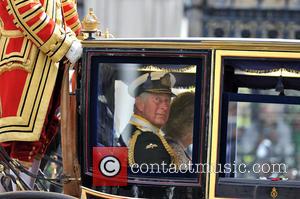 Picture: Prince Charles, Camilla and the Duchess of Cornwall - Queen Elizabeth II arrives at the Houses of Parliament for the annual State Opening of Parliament...

British royal Charles, Prince Of Wales was involved in a mid-air drama on Thursday (23May13) when his helicopter was forced to make an emergency landing due to a technical fault.

The heir to the throne was on his way to the Hay Literary Festival in Powys, Wales with his wife, Camilla, Duchess of Cornwall, when the pilot had to land after discovering a problem.

The royal couple touched down at Denham Aerodrome in Buckinghamshire, England and hit the road to complete their journey in a luxury car.

The hiccup made Charles and his wife over three hours late to the festival.

A spokesperson for the prince says, “The pilot carried out a controlled emergency landing after diverting to the airport."

An investigation has been opened to discover what caused the technical issue.