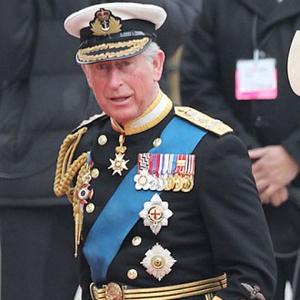 Prince William's father joked about his bald patch at his wedding reception yesterday (29.04.11).

Prince Charles made a speech in which he also paid tribute to William's bride, Kate Middleton â now the Duchess of Cambridge â welcoming her into the family.

Kate's ex-school headmaster Dr Bob Acheson told The Sun newspaper: "He said he was very lucky to have a daughter-in-law like Kate."

Also as part of the speech, Charles â who himself has a prominent bald patch â made jokes at his son's expense.

One guest recalled: "He joked about his own bald patch and his son's thinning hair, saying it must be hereditary.

"Everyone found it funny, even William and Kate."

The most eagerly awaited speech of the day, however, was that delivered by the best man, William's brother, Prince Harry, who is well known among the royal family for his sense of humour.

A wedding guest and friend of the 26-year-old royal told website US Weekly: "Harry was brilliant. We all wished he could have just carried on. It was perfect.

"But he was the model brother and said all the things he needed to say. It was perfect. He was a dude."

The reception was held at London's Buckingham Palace after the couple's wedding at nearby Westminster Abbey, and saw some 300 guests enjoy both an eight-tier wedding cake and a chocolate biscuit cake - a favourite of William's prepared at his special request - then party until the early hours of this morning (30.04.11).