Prince William and Duchess Catherine wanted their wedding photographs to capture the ''family occasion'', according to their photographer Hugo Burnand. 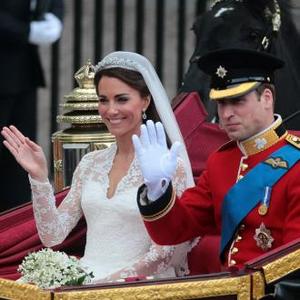 Britain's Prince William and Duchess Catherine were determined that their wedding photographs would capture the ''family occasion''.

Although the couple married in a lavish ceremony which was attended by a number of royals, politicians and celebrities, at London's Westminster Abbey in April last year, their wedding photographer Hugo Burnand said they were adamant that family was the most important.

Speaking as he launched the Schweppes social monarchs campaign, Hugo exclusively told BANG Showbiz: ''William, Catherine and I discussed what they wanted, it was a family occasion and that was first and foremost the most important thing, to capture that.

''For me and my team we were very much working for the families that day, it was only afterwards that we really understood what an enormous event it had been. We might have gotten stressed out had we thought about it too much.''

Hugo also revealed he and his team used stand-ins to practise taking the photographs before the big day, because they were worried about having a short space of time in which to get the shots of William and Catherine - who was known as Kate Middleton before her marriage.

He added: ''We spent three days in Buckingham Palace prior to the wedding, me and my incredible team of assistants and together we got the lighting as we wanted it to be. Knowing that we only had a very short window we did dress rehearsals with stand-ins and used stop-watches and we practised things going wrong such as lights not working, we had spares of everything. We were so well organised that by the day itself there were no nerves, it was like 'bring it on'.''

Hugo Burnand has teamed up with Schweppes to find the nation's social monarchs: the kings and queens of entertaining who are celebrating the Diamond Jubilee in style. To nominate yourself or a friend as a social monarch, or to pick up some great tips for your Jubilee party visit www.schweppesjubilee.co.uk