Prince William and his wife have left Buckingham Palace for a short break at Clarence House before returning for the evening reception tonight (29.04.11). 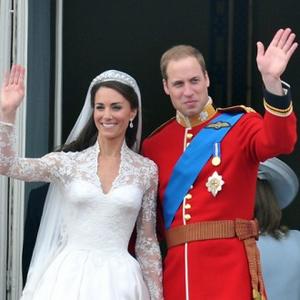 Prince William and his new bride left Buckingham Palace in a vintage Aston Martin after their wedding reception.

The Duke and Duchess of Cambridge thrilled onlookers as they departed the palace for a short break at Clarence House before they will return for their evening reception hosted by William's father Prince Charles later today (29.04.11).

William drove the low key couple the short distance to Charles' residence at Clarence House, in a car decorated with balloons and a license place reading 'Just Wed'.

After the bride and groom shared two kisses on the balcony of Buckingham Palace earlier today -where excited revellers shouted "We want Kate. We want Kate" - they attended a reception thrown by Queen Elizabeth for 650 guests.

However, the day has not gone entirely smoothly as a nervous William appeared to have trouble slipping the wedding ring on to Kate's finger as they exchanged vows in Westminster Abbey earlier today, although the bride -stunning in Alexander McQueen - didn't appear to mind.

Over one million people have lined the streets of London today to help celebrate the nuptials of the royal couple.