British Royal Prince William Returned To Work On Monday (13jul15) After Taking Time Off To Welcome His Daughter Princess Charlotte. 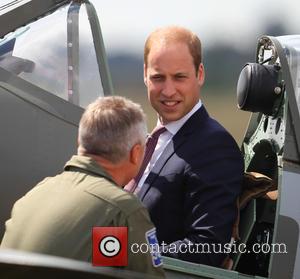 After finishing his training, he took time off in April (15) to prepare for the arrival of his daughter, Princess Charlotte, who was born in London on 2 May (15).

He then spent time with the newborn, his wife Catherine, Duchess of Cambridge, and their son Prince George on the Sandringham Estate in Norfolk, England before Charlotte's public christening earlier this month (Jul15).

The royal reported for his first air ambulance shift on Monday morning at Cambridge Airport in England. He will be a co-pilot attending emergencies in the Norfolk, Suffolk, Cambridgeshire and Bedfordshire regions.

The prince will work full-time and continue to fulfil his public engagements, telling the BBC, "At some point there's probably going to be a lot more pressure and responsibility from my other side of my life. At the moment I'm juggling the two of them and a young family. I'm enjoying it and I like the challenge, but inevitably down the line, things will probably become a little more difficult for me to do that, but while I'm still relatively young I can manage the two jobs as best I can."