Prince William's Kiss Got The Ok From Kate

Prince William asked Kate Middleton if their first public kiss as a married couple on the balcony of Buckingham Palace was ''OK''. 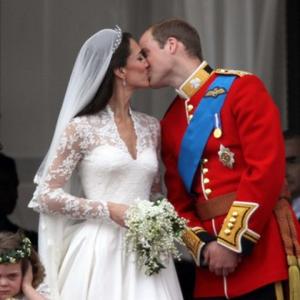 Prince William asked Kate Middleton if their first public kiss as a married couple was "OK".

The newlyweds - now titled the Duke and Duchess of Cambridge â appeared on the balcony of Buckingham Palace in London yesterday afternoon (29.04.11) and shared two kisses, to the cheers of crowds below and delight of a worldwide TV audience estimated at two billion.

According to The Sun newspaper, after they briefly touched lips William stood back, smiled and asked her: "That OK?"

Two minutes after their first smooch, William responded to chants from the crowd assembled below of "kiss, kiss, kiss, kiss," by asking his bride: "Do you want this? Takes a bit of getting used to.

"Another kiss! One more? Let's give them another one. I love you. One more kiss - go on, come here."

The couple lingered longer for their second kiss, which lasted 1.25 seconds, before Kate, 29, pulled away with a huge smile on her face for the assembled crowd which lined The Mall below.

William is then said to have called time on their public displays of affection, saying: "That's it. No more, no more, I'm embarrassed."

The young royal couple had earlier been married at nearby Westminster Abbey and were joined on the balcony by their bridal party and respective families - including Queen Elizabeth, Prince Philip, Prince Charles and Kate's parents Carole and Michael Middleton to watch a fly by of Royal Air Force (RAF) jets.