Review of 3121 Album by Prince

You can tell it's a different time from the heyday of Prince's career when he releases an album and the most we hear about him is when he gets criticised (and praised in equal measure) for appearing on the final of Pop Idol. Forgotten are the classic levels he reached on the 'Purple Rain' score, singles like 'When Doves Cry' and 'Sign o' the times' and fresher in memory are the 14 minute missteps on albums released as TAFKAP or Sign. His current release '3121' is arguably a better album than what he's released recently (excluding 'Musicology').

At 47 Prince is struggling to regain relevance, he has a fanatical followership and they would not agree with me, but there remains a massive gulf between the Prince on 3121 and the Prince on his earlier works and his classics (his first release 'For You' had Prince producing, arranging and playing all the instruments on the album himself). On this album, the need to maintain a balance between his current admission of being a Christian and the musical sexual revolutionary Prince of old sees him constantly tempering his once lewd and hugely suggestive references; on the first single off 3121 'Black Sweat' he goes "I'm gonna make you scream my name as if it was divine/ But we both know that we gotta praise the one who made ya". Rather tame from a man who once sang 'Can't u see I'm harder than a man can get/I got wet dreams coming out my ears' (from 'Sexy MF' on 'Prince and NPG'). 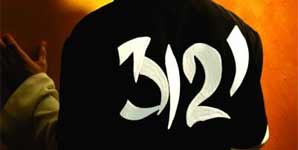 The album boasts the eccentricity of the title track '3121', the call and response pop commercialism of 'Lolita', the rock tinged Latin smoothness of the ballad and second single 'Te Amo Corazon' and the electro feel of the first single 'Black Sweat'. Then there's some more pop on the R&B infected and predictable 'Incense and Candles'; this is a Prince looking to win back fans so the odd pop song or 2 or 3, previously unacceptable on classics from a funk genius like Prince, are forgivable considering the depths of mediocrity he's waded in for the last few years in his battles with his old record company.

On 3121 Prince grabs back some of the funk he helped to pioneer but really doesn't seem to know where to take it; he draws a lot on what we know he has â the ability to infuse brilliant funk into his music, ever present on this albumâ but fails to break new ground like he used to. Apart from the impressive horn arrangement from Maceo Parker and 70's live funk feel on 'Get on the Boat' and the summer breeziness of 'Beautiful, Loved and Blessed' (featuring Tamar) the second half of the album doesn't quite live up to his own high standards.

Prince set the bar earlier on in his funk odyssey but struggles to match or scale these bars on 3121. A very listenable album, in spite of my unfulfilled desire for a 'Sign O' the times' or 'Purple Rain', and hopefully an indication of the resurgence of a pioneer.