Prince performed another surprise show at London's Shepherd's Bush Empire last night (09.10.14) as he continues a run of secret gigs. 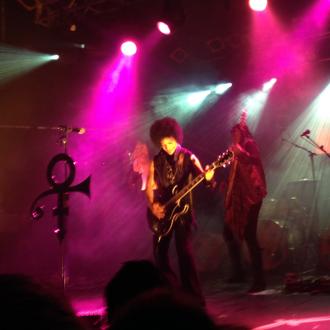 Celebrities including Cara Delevingne, Nick Grimshaw and Florence Welch danced along to the 'Purple Rain' hitmaker and his all-female band, 3RDEYEGIRL.

The gig followed a secret 'open sound-check' and two gigs in one night at the Electric Ballroom in north London last week, tickets for which were just £10 for fans who queued for hours in the rain to see the music legend.

Last night's concert was announced on BBC 6 Music by the singer's band and hundreds of fans started queuing outside the venue for tickets which were labelled as £70 and later brought down to £10 once gig-goers reached the doors at 7pm.

The singer performed new material with his band and launched into a medley of 'How Come U Don't Call Me Anymore?', 'Purple Rain' and 'Do Me Baby', which went down a storm with the audience.

Prince is continuing his string of surprise London performances at a number of ''iconic venues'' in the city which are causing a buzz on social media.

He has hinted at his desire to play venues such as Ronnie Scott's and the Bag O' Nails Club in Soho - although details for future gigs are being kept under wraps.

Prince also described his trip to London as ''open-ended'' and told fans: ''We're gonna try and find somewhere else to play in this city. We'll stay as long as you'll have us.''