By Charlotte Court in Lifestyle / Showbiz on 27 November 2016

In perhaps one of the stranger stories of the week, it has been reported that Princess Beatrice has allegedly cut the face of singer Ed Sheeran while trying to "knight" fellow songwriter, James Blunt as the pair attended a party thrown by the royal. Has Ed Sheeran been the victim of a royal prank gone too far?

Few questions have been really asked about the bizarre incident which apparently saw the Princess pick up a readily available sword before trying to enact her grandmother’s famous New Year’s reward. Princess Beatrice enjoys a evening out at the Roof Gardens in Kensington with her boyfriend Dave Clark, just a day after being involved in a car crash outside Buckingham Palace, in which she emerged unhurt. London, England - 13.10.10 Featuring: file princess beatrice and dave clark split 070816 Where: London, United Kingdom When: 12 Oct 2010 Princess Beatrice paid a visit to the Trinity Academy school in Halifax, West Yorkshire, England this Friday (June 21) to tour the brand new premises and speak to some of its students. The ultra-modern school made quite the impression on the 24-year-old royal and it seemed to be a fitting follow-up to the excitement of Thursday at Ascot.

After touring and speaking to the students in the West Yorkshire town, the royal continued her tour of the area at the nearby University of Huddersfield and then to the Forget Me Not Children’s Hospice, which is also found in the beautiful town of Huddersfield. The Princess told the students, “You’re so lucky to be in an academy like this, to be in a school like this, where everything can be brought together, where young people can be taught these amazing life skills in this incredible space.”

See more photo's of Princess Beatrice and the Queen at Ascot

British royalty Princess Beatrice and boyfriend Dave Clark entertained Hollywood couple Mila Kunis and Ashton Kutcher over the weekend, taking them on a tour of London's swankiest bars and restaurants. Things started at the Duck & Waffle on the 40th floor of Heron Tower in East London, but soon headed to Callooh Callay in Shoreditch.

Next came the John Salt bar in Islington, North London, where the drinks kept on coming. "They asked for our best speciality dish, said John Salt boss Leigh Gillson, "We gave them deep fried banana in caramel." A source added: "It wasn't a boozy bender, more an upmarket crawl." Mila, 29 and Ashton, 35, are currently living in London while the actress shoots her new movie Jupiter Ascending.

According to the UK's Daily Mail, the foursome even managed to hit celebrity restaurant Scott's in Mayfair and the Spanish restaurant Cambio De Tercio in Kensington, where Mila and Ashton were given matching Real Madrid shirts - which they later wore. 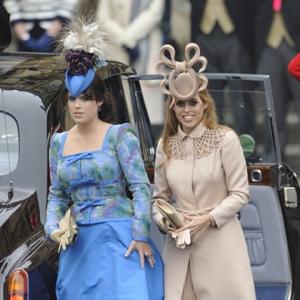