The Prodigy,
Out of Space Audio Bullys Remix
Single review

In 1976 Max Romeo and The Upsetters released 'War In a Babylon' on Island records. The genius reggae producer Lee "Scratch" Perry was obsessed with doin' something to the Devil. "He came up with this song about hangin' the devil up, cuttin' his throat an' throwin' him in the fire!" says writer Max Romeo "So I say 'You don't have to do that, let's just chase him out of earth, send him to outer space to find another race', and right away go into writin' the song." 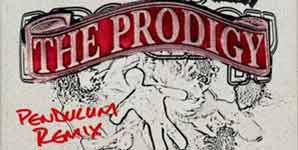 Cut to 1992 and four Essex boys from Hornchurch aka The Prodigy release 'Out of Space', simultaneously creating a rave classic and introducing the world of dub reggae to a generation of stoners.

Thirteen years on enter the Audio Bullys. Keeping the original Max Romeo sample, and the "pay close attention" Prodigy lyrics, this remix lacks the energy of Liam Howlett's masterpiece with a monotonous bass and some ropey rapping.

The highlight to this double A side is the Pendulum remix of Voodoo People. Keeping the guitar driven riff this is a hardcore remix of a hardcore track. One of the best songs on "Music for the Jilted Generation", Pendulum have only gone and made it better.