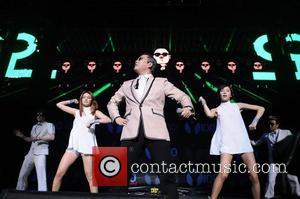 Psy's Gangnam Style became the most-watched YouTube video in history last week, though the South-Korean native has now well and truly cemented his place in popular culture with a dictionary inclusion!

'Gangnam Style' - Psy's signature song featuring THAT horse-riding dance routine - has been chosen as one of Collins' Dictionary words of the year. OK, so it's more of a phrase (or title) than a word, but it joins a select group of other unconventional 'words' that encapsulate 2012, including "fiscal cliff" and "Romneyshambles." Ian Brookes, the dictionary's consultant editor said, "We were looking for words that told the story of the year. Some words are from events that have been and gone and so are not likely to stick around... but others are probably here to stay." Fiscal cliff refers to President Obama, Congress and government spending, while Romneyshambles specifically refers to Mitt Romney's gaffe-ridden visit to London in July in which he questioned Britain's readiness to host the Olympics.

Though the words including on this year's list have no guarantee of inclusion into the next dictionary, Brookes said Gangnam Style has a decent chance. "It's obviously a craze, so there's the possibility it will go away. But it's been heard by so many people that I think it's probably earned the right to go into the dictionary."