Posted in Press Releases on 10 September 2013 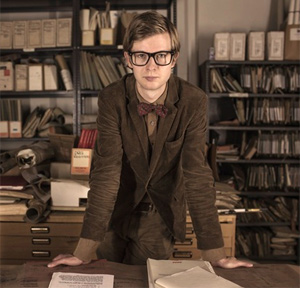 After a triumphant festival season which has seen Public Service Broadcasting playing to packed stages and tents across the UK, the duo return this Autumn with Night Mail, the stand-out track from their critically-acclaimed debut album 'Inform - Educate - Entertain'. Their first long-player came in at #21 in the UK album chart in May 2013 and was nominated for Best Independent Album at AIM Awards 2013.

'Night Mail' takes as its subject matter from the eponymous film of 1936, a pioneering documentary film produced by the General Post Office and the Royal Mail Group. Setting the original words of the documentary - including the much loved Night Mail poem - to a song that evokes the rhythm, speed and excitement of the railway in the era of the steam train, PSB breathe a new lease of life into a gem of a film.

To accompany the single release the band take to the road for a full tour of the UK & Ireland in November 2013. Coming up in September they are also on tour with Manic Street Preachers for a run of dates - capping off a fantastic year for the band which has seen them sail past 100 live transmissions, including support slots with New Order @ Jodrell Bank, The Rolling Stones @ Hyde Park and over 30 summer festivals including Glastonbury, Green Man, Festival No.6 and many more.