When Frank Carter, incendiary frontman of Gallows, announced his departure a little over 18 months ago, fans went into what can only be described as mourning. Choosing to channel his energy into something altogether more upbeat, Carter joined forces with former Hope Conspiracy guitarist Jim Carroll and, as Pure Love, centred in on writing music that they both enjoyed. Anthems is the fruit of their hard work, the product of their vision and a joyous musical celebration. 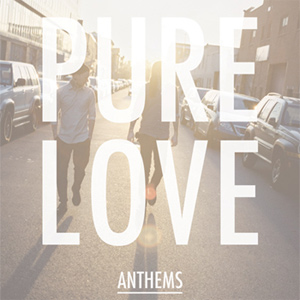 One of the first things that hits when listening to Anthems is that Frank Carter can really sing. Gone are his characteristic throat-shedding vocals from the likes of Gallows' 'Misery' or 'In The Belly Of A Shark'. Instead, Carter's vocals are surprisingly mature, showing excellent melody and range. By the time opening track 'She' fades away and the familiar introduction to 'Bury My Bones' rings out, it is clear that Pure Love are something new and exciting. It was the first single released by the band in early in 2012, and when Carter croons the opening lines: "I'm so sick of singing about hate. It's never gonna make a change. It breaks me down bit by bit. Keep me steadily feeling sick", his sincerity translates effortlessly.

When the album moves into the brooding 'Anthem', Carroll's playing is complemented by a piano part that hearkens back to the 1950s and with Carter displaying all his soulful qualities, the climax is a swirling musical mass, drawing the listener in deeply. The album's pivotal moment arrives in the form of one of the best songs either Carter or Carroll have ever put their name to, 'Beach Of Diamonds'. Already a shoe-in for the best tracks of the year, its infectious chorus call of "Dive in, Dive in" sinks in slowly, weaving its way into the back of the mind until it emerges days later, hummed out of the blue.

This isn't to say that both characters have completely forgotten their roots. 'Scared To Death' is a rabble-rousing rocker; at moments seeing the creative duo coming close to dipping back, stylistically at least, into their earlier days. The album also finishes strongly, 'Riot Song' offering yet another memorable chorus, before the slow-burning 'March Of The Pilgrims' provides a fitting curtain call for Anthems.

As strong as Anthems is, it is by no means Pure Love's finished article. Between the highlights, there are a number of lulls, though the quality of the singles carries the record through these moments. Last summer, the band played outstanding sets at the Reading and Leeds festivals, based largely on Carter's reputation alone. Anthems will only add to the buzz, proving doubters wrong and winning an army of new fans in the process.