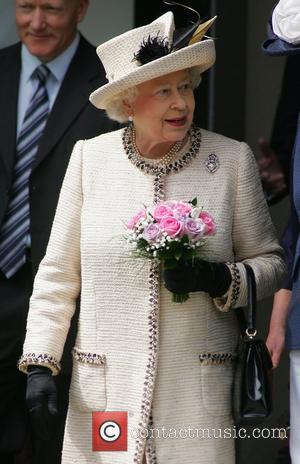 British royal Queen Elizabeth II enjoyed filming a James Bond-themed sketch for the opening ceremony of the London Olympics, admitting it was "a bit of a laugh".
Her Majesty appeared alongside 007 actor Daniel Craig in a pre-recorded film, directed by filmmaker Danny Boyle, in which she was shown being transported by helicopter to the Olympic Arena in Stratford, before appearing to parachute down to the ground.
The Queen was unable to see the clip, which also featured her beloved corgi dogs, when it aired during the big event on Friday (27Jul12) as she was hiding backstage at the stadium, ready to make her grand entrance.
However, according to Britain's Daily Mirror newspaper, she told the Mayor of London Boris Johnson on Saturday (28Jul12), "It all seemed to go very well last night. But I didn't see my bit."
Johnson told the monarch she was "­brilliant", to which she replied, "It was a bit of a laugh."
It has since emerged the Queen performed her screen acting debut in just one take, with a production official telling the publication, "It was not a case of having to persuade the Queen to take part. Her Majesty said 'Yes' to it straight away. She thought it was such brilliant fun. And when the idea for the format was explained to her, she was happy with that, too.
"When we came to filming it the Queen was a natural. Did it take long? No. Let's just say we only had to film it once. And yes, they were the Queen's corgis. We had others on stand-by if it was required but we never needed to use them."