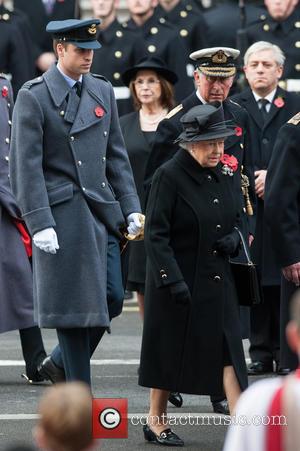 Picture: Queen Elizabeth II, Prince William and The Duke of Cambridge - Photographs from the Remembrance Sunday service held at the Cenotaph to remember those brave...

British monarch Queen Elizabeth II is headed to the theatre to check out Kristin Scott Thomas's depiction of her in The Audience.

The royal is said to be planning a trip to see the London play, which chronicles her weekly meetings with various U.K. Prime Ministers.

Playwright Peter Morgan previously voiced his disappointment when Elizabeth failed to visit the stage drama during its inaugural 2013 run, with Dame Helen Mirren as the star, but the Queen has now requested a viewing of the show.

Morgan tells Britain's Sunday Express newspaper, "The Queen has asked to see the play herself. She apparently said she was sorry to have missed it on its last run and I think that's partly because it took that long for enough people to have seen it in her circle to tell her it's worth seeing. I know her private secretary came and various former high-ranking courtiers and present courtiers."

The play has enjoyed huge success throughout its run, winning a number of awards. A Broadway production is planned for this year (15).