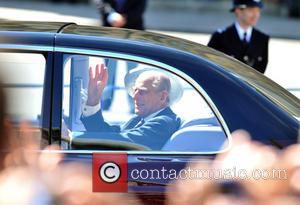 Queen are set to become the latest rockers to get fans drunk after announcing plans to release a new vodka.

The Queen-branded Killer Queen tipple will mark the 40th anniversary of the band's 1974 hit single of the same name.

Guitarist Brian May recently visited the Stoli vodka production plant in Riga, Latvia, where the new drink was created, to oversee work on the beverage and called the place "the Willy Wonka chocolate factory for adults".

May admits the vodka is a fitting tribute to the band's late frontman Freddie Mercury, adding, "Freddie loved vodka and used to carry a dry ice cooler full of vodka with him on tour. Killer Queen Vodka is the perfect tribute."

Killer Queen, which is also the name of Katy Perry's latest perfume, is "seven times distilled using an ancient original vodka filtration process of quartz sand and birch charcoal with a unique filtration process at the final stage."

The Stoli limited edition will be available in the U.K. from 17 September (14).