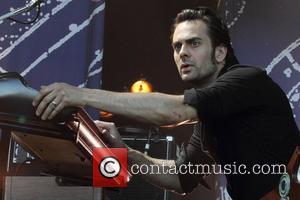 Former Queens Of The Stone Age star Nick Oliveri has pleaded not guilty to five charges stemming from his stand-off with police in Los Angeles last summer (11).
The bassist was arrested at his home in the city in July (11) after cops were called to the property to investigate reports of a domestic disturbance.
He allegedly refused to allow police officers into his home and was finally taken into custody after a five-hour stand-off with a special weapons and tactics (Swat) team, which was called in over fears the star was in possession of a gun.
The case went to court on Thursday (08Mar12) and Oliveri pleaded not guilty to two counts of possession of a controlled substance with a firearm, two counts of possession of a controlled substance, and one misdemeanour count of resisting, obstructing or delaying a peace officer (sic), according to Tmz.com.
A trial has been set for 13 April (12) and the musician faces up to 15 years behind bars if convicted of all the charges.