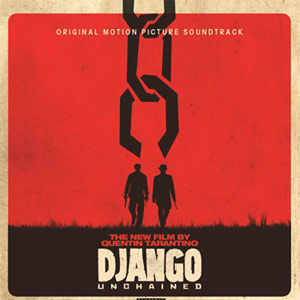 Some of the finest moments come from the musical genre maestro that is Ennio Morricone and 'The Braying Mule' is one such delightful interlude which with its simple twitchy guitar line bounds along with purpose into the majesty of 'Un Monumento' which signals a shift in style to a more authoritative approach to things and is clearly where Django is. erm. well, 'unchained' metaphorically speaking of course. It makes sense then that the following track be titled 'Unchained' and is a lesson in cool from James Brown and 2Pac that couldn't suit Django's needs any better if it was a pair of pliers. Luis Bacalov's instrumental history in Spaghetti Western's also heightens the senses here as his grand scale transports you to the distinct time and place which is exactly why it's his work you'll have been hearing on the main theme 'Django' which opens the movie with a pulse pleasing rhythm that sets the tone of everything to come. It's imbued with menacing undertones and an overwrought sense of style and substance that are at each other's throats throughout.

It's music that's stamped with Tarantino's mark; 'Nicaragua' is injected with the happy-go-lucky feel of the incredible True Romance score and Jim Croce's 'I Got A Name' is a classic left-field choice that's given new life by its use here. With this soundtrack Tarantino has once again shown his ears are just as good as his eyes.