R. Kelly didn't mess around when he came back from the hiatus owing to his emergency in 2011. Since then we've had the revival of 'Trapped in the Closet' for another story arc and the release of 2012's 'Write Me Back', an album that saw Kells explore his traditional R&B side incorporating heavy influences from Chicago Step and Philadelphia Sou. With his second post-surgery album, 'Black Panties', Kells has reverted to his '12 Play' ways once again and taken on board a more hip-hop-influenced sound and, rather than singing about love, he's back to singing about making love. 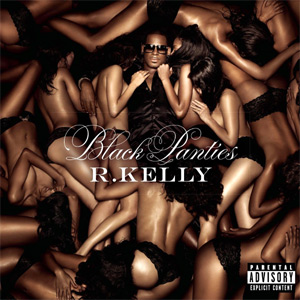 He's as unsmiling as he's ever been, no matter how ridiculous some of the song lyrics and titles are. It's hard not to laugh at it though, regardless of how seriously Kells takes himself when he's on the mic. In his brilliantly titled autobiography 'Soulacoaster', Kells acknowledges that some of his songs are in fact comical, noting that the song 'Feelin' on Yo Booty' is a "comedic sexual song" and that "you've gotta have a joke or two in there. You gotta do something to keep the crowd".

Twelve albums in and Kells still controls a big crowd whose numbers increase by the day, arguably thanks to his tendency not to take himself too seriously on a song, but also down to the fact that he can still make a hit record on a whim. The man has no shortage of range and can quite as easily make a bawdy '12 Play' throwback as easily as he can a gospel-inspired show of faith. He's gone for the former on 'Black Panties', giving his sex obsessed mind room to wander through your eardrums and his vivid, overly sexualised imagery time to amuse, which it does repeatedly. One of the best early examples of his tongue in cheek take on explicit song writing on 'Black Panties' can be found on the softly spoken 'Marry the P***y', where the Chicago-native sings, "P***y talk to me/P***y sing to me/Yeah, so much joy you bring to me" over a gentle guitar and bubbling bass. With his trademark tonal shifts delivering lines like that, how can you not laugh at it?

When he's not wanting to wifey dat ting, Kells just wants to get down and dirty as the onslaught of lewd imagery makes no effort to conceal what has been playing on his mind. Things actually begin to get overly vulgar at some points as his sexual metaphors descend almost into violence, laying bare his questionable taste of bedroom antics and his eclectic taste for sexual positions and vaginas of all shapes and sizes. On 'Cookie' he brags about "killing the p***y", licking it "like an Oreo", breaking it open "like a lobster" and "until it's blue", insisting that when he's done you'll be "craving" his member.

The misogyny is found throughout his sexualised lyrics as he croons about a love affair with a stripper in the club like it's the most sensual love affair of the year on 'Throw This Money On You'. You don't go into an R. Kelly album not expecting these elements though, especially an album in which Kells tries to reintroduce his marquee 90s '12 Play' style. Copious amounts of sex, innuendos and a general lack of regard for the opposite sex (bar the reproductive parts) are all emblematic of arguably the finest R&B singer of the past twenty years. He makes his legacy clear on 'Shut Up' which makes a welcome appearance on the album having first been released when Kells got the OK to return to the recording booth following his 2011 throat surgery. As he brags, "Let's be honest: How many babies been made off me?" you have to agree that there's probably a few; his work is mostly designated for the bedroom or the back seat of a car and that's where he intends to keep it. You don't become a multi-million selling artist, one who can survive a life and career-shattering sexual abuse court case and come out smelling of roses, without having an enduring quality, and his quality still hasn't waned on 'Black Panties'.