Review of In Rainbows Album by Radiohead 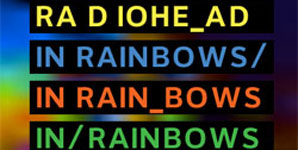 Since the end of their ties with Parlophone, Radiohead have been following their own path, to the extent of releasing their new album only via their own website. And allowing people to pay whatever they want for the download version. Literally. Â£1 or Â£10, you get the same album download. However, given the trend towards increasing disinterest in Radiohead, this has, at a swoop, provided a) a very newsworthy Radiohead release, and b) brought back interest to a lot of people to the fold who have simply stopped buying their albums. The question is, then, is it a good Radiohead album? And the answer would have to be a unqualified 'yes' - it is more to the Kid A end of OK Computer rather than Creep or The Bends, but there are songs that rock hard (Bodysnatchers), ballads (Nude is classic Radiohead) and some genuinely great songs - Jigsaw Falling Into Place, House Of Cards.

Thom Yorke's The Eraser would be the perfect appetiser for this album - if you get that album, and what it wants to do (disorient, to a great extent), and mix with some great Greenwood guitar, In Rainbows will be perfect. There's no doubt that this is a challenging listen - it's unlikely to work for you on first listen. But (and this feels wonderful to write) it is a great Radiohead album - well worth whatever you decide to pay for it. Album of the week.