After giving us 'The Bends' and before they brought 'Kid A' into the world Radiohead released their groundbreaking album 'OK Computer'.

Radiohead pretty much shot to fame with the release of their debut single Creep in 1992. They quite quickly capitalised on the international success of the track with the release of their debut album, Pablo Honey, early the following year. Due to the strong performance of their initial releases Radiohead were allowed more freedom to develop their sound on the follow up album, The Bends, released in 1995. The latter album secured the reputation of the Oxford based band and spawned six successful singles itself including, My Iron Lung and Fake Plastic Trees. 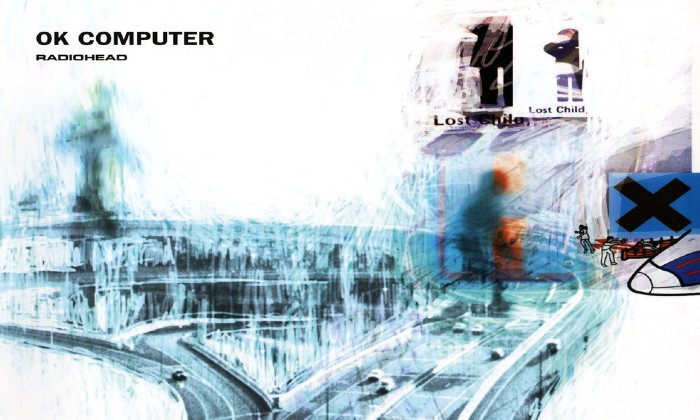 Radiohead's third studio album, OK Computer, arrived towards the end of the millennium and the end of Brit-Pop proper, but heralded the start of the band's move into a more experimental and challenging phase. There was no desire from anyone, other than label execs, to repeat the structures and combinations employed on their previous album, The Bends. There was however a want to build on their success and deliver an album that captured the juxtaposition of simultaneously "embracing the future" whilst at the same time, "being terrified by the future."

OK Computer was generally very well received when it was released but, never-the-less, it was not universally liked. At the time of it's release, and through retrospective critical review ever since, OK Computer was and is undoubtedly a highly regarded album by many; one that not only saw Radiohead embrace a more experimental confidence but also one that came to shape the sound of modern rock as it developed in the early part of the 21st century.

Where OK Computer finds it's detractors is in it's very fabric so it is unlikely that the opinions of those that find fault in it will ever change. It is true that ostensibly OK Computer is a Rock album, delivered by five white, privileged, upper middle-class male musicians playing, to a greater extent, a collection of instruments that have largely been played on every Rock album since dawn. It could also be argued, with some degree of authority, that the album is in some ways indulgent, and for some the sound that is heard on OK Computer is one of pathetic whinging and whining. As well as topping out many 'best of lists', OK Computer is also included in many 'overrated albums' lists.

All art is subjective so it's no real surprise that OK Computer gives rise to a difference of opinion. It depends which way you choose to look at it. One man's over indulgence is another's attention to detail and one man's whinge is another's heart-felt out pouring of emotion. Whilst some may say that the claustrophobic mix gives no room for the songs to breathe others would argue that it is an all encompassing arrangement that wholly embraces and envelopes you. (On which ever side of the fence you sit you cannot really argue that OK Computer is not a wonderfully crafted, deftly delivered and incredibly artistic creation played by five very accomplished musicians).

Even though OK Computer is now 24 years old it has not lost any of it's initial appeal to those that find it an incredible album, it has in fact become decidedly more relevant with every year that has passed since it's release. The theme of isolation that runs through the album is more topical and vital than ever before. The exploration and expansion on topics of paranoia, psychosis and mental well-being were, at the very least, ahead of the curve.

Radiohead's outlook on OK Computer may have appeared outwardly gloomy but it was not without just cause. The exploration of despondency, disillusionment, despair and dismay that are brought to the fore were captured brilliantly by the lyrics of Thom Yorke. "A heart that's full up like a landfill, A job that slowly kills you, Bruises that won't heal, You look so tired, unhappy, Bring down the government, They don't, they don't speak for us, I'll take a quiet life, A handshake of carbon monoxide" Yorke sings on the last single to be lifted from the album, No Surprises.

OK Computer shifted the direction of Radiohead's sound and managed not only to elevate their stature to a higher plane but also set a new benchmark in terms of Art-Rock albums. When you listen to the original twelve track album now it seems astonishing that it didn't win the 1997 Mercury Music Prize (Winner, Roni Size & Reprazent – New Forms), or win a BRIT for best album (Winner, The Verve – Urban Hymns). It did, deservedly, win a Grammy for Best Alternative Music Album and has also subsequently been "included by the Library of Congress in the National Recording Registry as culturally, historically, or aesthetically significant." (OK Computer has also now sold more than seven million copies worldwide).

OK Computer is an album that has matured very well with age and has only gotten better. As with all outstanding music, Radiohead and their third album, OK Computer, pushed boundaries and it has certainly been inspirational in terms of it's influence and legacy.