Rae Sremmurd Rapper Slim Jimmy Has Been Hospitalised After Slipping And Falling Offstage During The Duo's Set At New York's Governors Ball Festival On Friday (05jun15). 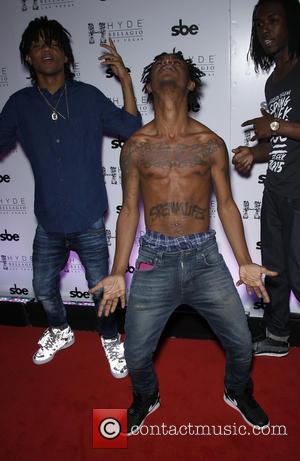 The hip-hop stars were just 10 minutes into their afternoon set on the first day of the event when Slim Jimmy tumbled from the top of a speaker and plummeted to the ground.

Security guards rushed to his side and helped to carry him back onto the platform, but it was clear the youngster, real name Aaquil Brown, had been seriously hurt.

His brother and bandmate, Swae Lee, halted their track Unlock The Swag to check on his sibling, and told the audience, "This s**t is pretty crazy... This n**ga's leg is like, split open, I'm serious."

However, the injured rapper refused to cut short the performance and instead urged his brother to continue with the show.

Rae Sremmurd and their handlers were later spotted leaving the venue on Randall's Island via ambulance, according to Billboard.com.

Slim Jimmy's condition was unknown as WENN went to press.

Drake and Florence + The MAChine are among the headliners for the first day of the annual three-day festival, while Deadmaus, Bjork, Lana Del Rey and The Black Keys are also set to hit the stage over the weekend (06-07Jun15).