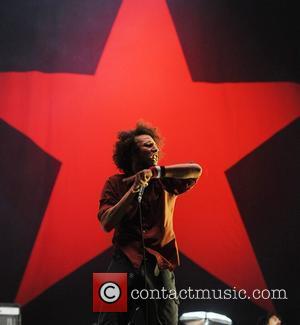 Rage Against The Machine frontman ZACK DE LA ROCHA is leading a star-studded crusade against Arizona lawmakers over the state's controversial new immigration legislation.
The rocker has enlisted dozens of musicians and activists to join a boycott of the state of Arizona over its recently passed immigration law, which requires local authorities to determine a person's immigration status if he or she is suspected of being undocumented.
So far, Cypress Hill, Juanes, Conor Oberst, Los Tigres del Norte, Massive Attack, Jack Black, Kanye West, filmmaker Michael Moore and De La Rocha's bandmates have joined the campaign, which was launched on Wednesday (26May10).
Announcing the project, the Rage Against The MAChine star says, "Fans of our music, our stories, our films and our words can be pulled over and harassed every day because they are brown or black, or for the way they speak, or for the music they listen to.
"People who are poor like some of us used to be could be forced to live in a constant state of fear while just doing what they can to find work and survive. This law opens the door for them to be shaked (sic) down, or even worse, detained and deported while just trying to travel home from school, from home to work, or when they just roll out with their friends."
Hip-hop acts Pitbull and Cypress Hill and Latino artists Conjunto Primavera, Espinoza Paz, Jenni Rivera and Wisin & Yandel have cancelled upcoming Arizona shows to protest the legislation.