Fact: Rocker Dave Grohl and actors Jordana Brewster and Rainn Wilson put their drawing skills to the test during an appearance on America's Late Late Show with James Corden on Monday (06Apr15) after agreeing to sketch a naked, mature male model. Host Corden also joined in the fun and the stars all showed off their finished artwork at the end of the show.

Fact: Former The Office actor Rainn Wilson and his wife have become the proud owners of a bizarre new pet - a zonkey. The couple paid $3,000 (£1,875) for the zebra-donkey hybrid.

Fact: American Pie star Jason Biggs and Rainn Wilson will be showing off their tennis skills on Thursday night (05Sep13) when they take on former professionals Chris Evert and Monica Seles at the U.S. Open. The Tv and movie stars will team up in a "battle of the sexes" clash against the former champions at Arthur Ashe Stadium in New York.

Quote: "My wife and I have been going down to Haiti a fair amount and helping out down there. Sean Penn has an incredible charity down there, it's unbelievable, I can't say enough good things about it. We just go down occasionally and we've been teaching some art classes with adolescent girls, who live down in Haiti, and kind of some empowerment classes... It's been a lot of fun." The Office star Rainn Wilson on his efforts to help rebuild earthquake-ravaged Haiti.

Fact: Comedian Rainn Wilson is set to front his own TV spin-off from the hit U.S. version of The Office. The series will focus on the funnyman's character Dwight Schrute and his life on a beetroot farm and bed and breakfast.

Quote: "I always get on conference calls four minutes late, because it's not so late that it p***es people off, but it's just late enough to show how important I am." Office star Rainn Wilson jokes about abusing his power as a celebrity.

Fact: Actor Rainn Wilson's father, Robert, once had a science-fiction novel published in the mid-1970s. The book, entitled Tentacles of Dawn, is now a collectors item. Wilson read an extract from the book during his appearance on Jimmy Kimmel Live! in America on Tuesday night (22Mar11).

Quote: "I was a philosophy geek and we had this crazy idea - me and my friends - to rap philosophy on the streets of Seattle." The Office star Rainn Wilson got his first taste of the spotlight rapping philosophy.

Fact: Funnyman Rainn Wilson's portrayal of a manic musician in THE ROCKER has landed him a real-life rock role - The Office star is collaborating with Rivers Cuomo on Weezer's new material.

Fact: A string of A-listers took to the stage at the Independent Spirit Awards on Saturday (21Feb09), to pay musical tribute to nominated movies. The Office actor Rainn Wilson impersonated Mickey Rourke'S THE WRESTLER character to sing James Brown's I FEEL GOOD; Christina Applegate sang Tina Turner'S ROLLING ON THE RIVER as an ode to FROZEN RIVER; Teri Hatcher paid a raunchy tribute to WENDY & LUCY; and TARAJI P. HENSON seranaded the crowd with a rendition of R.E.S.P.E.C.T - replacing the chorus with B.A.L.L.A.S.T (for Ballast).

Fact: A string of A-listers took to the stage at the Independent Spirit Awards on Saturday (21Feb09), to pay musical tribute to nominated movies. The Office actor Rainn Wilson impersonated Mickey Rourke'S THE WRESTLER character to sing James Brown's I FEEL GOOD; Christina Applegate sang Tina Turner'S ROLLING ON THE RIVER as an ode to FROZEN RIVER; Teri Hatcher paid a raunchy tribute to WENDY & LUCY; and TARAJI P. HENSON serenaded the crowd with a rendition of R.E.S.P.E.C.T - replacing the chorus with B.A.L.L.A.S.T (for Ballast).

Quote: "My first concert was J. GEILS BAND. Me and my buddies thought it was so cool that they had a harmonica player named Magic DICk. There were joints being passed around at the show (and)... I was certain I was going to get stoned and become a junkie and start shooting heroin into my eye." The Office star Rainn Wilson.

Quote: "He is charming, ruggedly handsome, talented, speaks five languages; I wanna f**k him so hard." Film Independent Spirit Awards host Rainn Wilson was all love as he presented the 2008 event's honorary chairman and Best Director presenter Javier Bardem onto the tented stage at the Santa Monica, California prizegiving.

Fact: The organisers of February's (08) Independent Spirit Awards have pulled off the biggest coup of the awards season - as well as winning a waiver from the striking Writers Guild of America to stage the show, they've announced WGA member Rainn Wilson as their host.

Fact: The Office star Rainn Wilson is in negotiations to provide the voice of the sarcastic sports car KITT in a new KNIGHT RIDER TV movie.

Quote: "It was like meeting JESUS." Actor Rainn Wilson on working with original Beatles star Pete Best in new movie THE ROCKER. 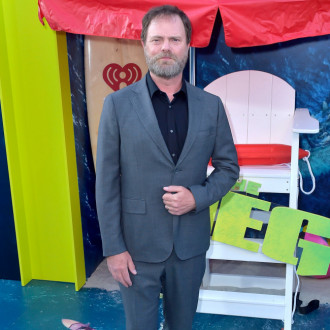