Randy Jackson is to divorce his wife after nineteen years.

Sad news for Randy Jackson; his wife of eighteen years, Erika Jackson, is filing for divorce. Randy Jackson is facing divorce from his wife of eighteen years

TMZ was first to report the news. The couple had a plan to file the papers, but Erika Jackson decided to file on Friday, citing irreconcible differences. She is seeking full physical and joint legal custody of their seventeen year old son Jordan. Their grown daughter, Zoe, is not mentioned in the documents. Erika is also seeking spousal support and the cost of her attorney's fees. Randy's marriage to Erika was his second, having previously been married to Elizabeth Jackson, with whom he also has a daughter. He split with Elizabeth in 1990 and has been married to Erika for eighteen years.

Continue reading: Randy Jackson Is Divorcing His Wife After 18 Years And Then There Were Three - Who Got Voted Off "American Idol" This Week?

With three contestants left, things are about to get personal.

Well, it’s about that time again – time to announce the top three contestants on this year’s round of American Idol. Where did the time go? So from last night’s performances we know that Jena Irene is pretty much safe – when you make Jennifer Lopez so excited that she starts dropping F-bombs on camera, it’s a pretty safe bet that you aren’t going home (well, not permanently anyway). Beware of spoilers ahead. Randy Jackson had the spotlight before the finalists were announced.

Before the final reveal, however, we got to hear some of Randy Jackson’s oh-so-valuable critique (we’re guessing the show just had too much time leftover). Despite the fact that Jackson’s praise was largely unnecessary, it was nice to hear him being so unusually nice to the contestants, so we’ll let that slide.

Continue reading: And Then There Were Three - Who Got Voted Off "American Idol" This Week? Rumour has it, this year's finale will be held in the Big Apple for the first time.

American Idol's 13th season could be held in New York City, if there's any truth to the rumours currently flying around. The upcoming new season of the singing talent contest is preparing for launch but has beefed up its usual format and streamlined its panel of judges. Season 12's Contestants Before They Were Whittled Away.

Apparently, plans are in place to have the final contestants battle it out on stage at the city's prestigious Madison Square Gardens in front of a giant arena audience of 8,000, according to THR. De-camping from L.A to NYC would represent a major move for the show, which has seen a decline in ratings to rival show The Voice in recent years.

The Great American Idol eviction continues at full speed with Nicki Minaj and Mariah Carey being the latest two to get the boot. Nobody is entirely shocked by the news though, as this seemed to be looming over the judges’ heads. With the last season, which ended with Candice Glover being crowned as the winner pulled in the lowest viewing figures of any American Idol year – with just 14.2 million people tuning in to watch the finale – it was clear something was amiss. Apparently the (truly impressive) level of conflict and drama that Minaj and Carey brought to the format, wasn’t enough to get the audience to pay attention. Rumors of firings and a complete restructuring of the judging panel have also been rampant ever since the show’s disappointing finale. It was only a matter of time.

Both Nicki and Mariah announced the news if their respective departures over Twitter and Fox released statements regarding both decisions, which, considering the circumstances, was the very least they could do.

"Mariah Carey is a true global icon - one of the most accomplished artists on the planet - and we feel extremely fortunate that she was able to bring her wisdom and experience to the 'American Idol' contestants this season," Fox said, via Reuters.

Was Jennifer Lopez's performance on Britain's Got Talent too raunchy for family audiences?

Jennifer Lopez gave UK viewers of Simon Cowell's Britains Got Talent a real eyeful on Tuesday night, performing her new single 'Live It Up' while wearing a skimpy black leotard that barely covered her famous behind. Twitter immediately sprang into action, with some parents concerned about the "inappropriate" nature of her performance on what is considered a family show, with some young children actually performing.

According to the Hollywood Reporter, a spokesperson for TV regualtor Ofcom said, "Ofcom can confirm that it has received complaints about the Britain's Got Talent broadcast last night, which we are assessing but not currently investigating." One viewer on Twitter said, "BGT does #jenniferlopez realise it's a family show - only thing missing was the pole - cover up your cheeks please!" though judge Simon Cowell was pretty happy with how things went, telling Lopez, "Seriously, J-Lo. If anyone wants to know how you do it. That's how you do it,' he said. "Seriously world class."

For what it's worth, Lopez herself seemed pretty oblivious to any concerns and happily posted an Instagram of the R&B star being held up by various dancers. "Thanks @GotTalent for a great night #liveitup," she added.

Jennifer Lopez - Live It Up (Live Britain's Got... by JohnJLover

American Idol Hasn't Called Keith Urban Yet, (Do You Want To Tell Him, Or Should We?)

Keith Urban may be on his way out of American Idol.

Keith Urban says he is still awaiting his fate on American Idol and remains in the dark of producer's plans for the new season. Urban has been a popular and inoffensive judge on the show for season twelve, though industry sources suggest Fox are planning a complete overhaul of the show for season thirteen.

"I have no official information of anything. I'm pretty much in the same boat as everybody else here with the rumors that have been floating around," Urban told the Associated Press, "I don't know anything more about what's happening next season. It was like this before I signed on . . . so it's not unusual for the Idol folks to be in this place of figuring out what they want to do, then they always pull it together." Last week, E! News reported that Mariah Carey, Nicki Minaj, Randy Jackson and Urban would be replaced by Jennifer Hudson, Kelly Clarkson, Adam Lambert and possibly Aiken. American Idol producers were left red-faced midway through season twelve after it emerged they had tried to replace Mariah with previous judge Jennifer Lopez following dwindling viewer ratings. Carey's legal team blocked any such thing from happening.

We assume Urban wouldn't be too fussed should Idol bosses want to take the show in a different direction. His new album Fuse will hit shelves on September 10, 2013 and he'll head out on a huge tour in mid-July. Oh, and he's married to Nicole Kidman. So...

Continue reading: American Idol Hasn't Called Keith Urban Yet, (Do You Want To Tell Him, Or Should We?)

Jennifer Hudson To Judge On The Show That Launched Her Career?

Former 'American Idol' finalist Jennifer Hudson is rumoured to be on the judging panel for season 13.

Jennifer Hudson is reportedly in talks about becoming a judge on the 13th season of 'American Idol'; the same show on which she became a finalist in season 3.

The 'Dreamgirls' star and Grammy winning pop star has had previous experience in talent show judging, having become Kelly Rowland's guest mentor during the Judges Houses stage of the UK show 'The X Factor'. Now she could be set to revisit the beginnings of her own career though, this time, on the other side of the table according to a source in TheWrap. She made an appearance on the show recently for the finale and is allegedly now in talks with the producers. 'She got the offer and her reps are currently negotiating with [production company] Fremantle', said the source, adding, 'The show's producers feel they've lost their core audience. And they want to bring back former contestants in order to tell their core audience, 'We love you.' They know they've made some major mistakes over the past few seasons and they want to make it right with their fans.'

One of the judges, Randy Jackson, has handed in his resignation from the show already, though it is unknown whether or not Keith Urban, Mariah Carey and Nicki Minaj will stay on for another series.

Continue reading: Jennifer Hudson To Judge On The Show That Launched Her Career? 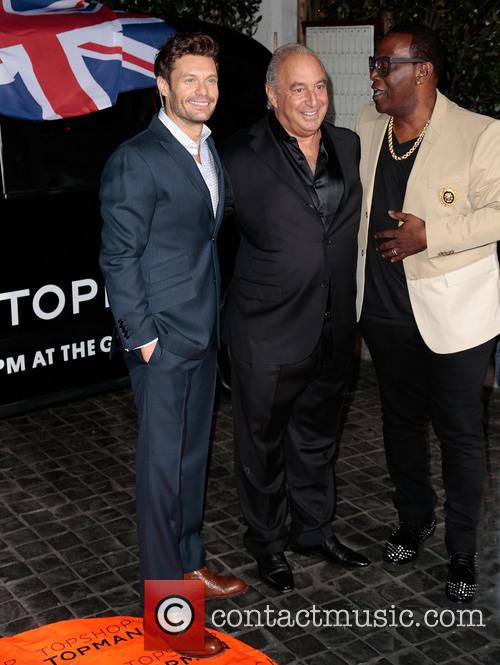