Review of Neckbrace Single by Ratatat

The star of Ratatat's 'Neckbrace' is its funky bass. It struts along in a cocksure manner, suave and smooth, forcing the rest of the track to keep pace. If you met it on the street, it would undoubtedly be wearing designer sunglasses and a leather jacket, and it would be able to pull off the look through sheer self-confidence and personal magnetism. It's that sort of bassline. 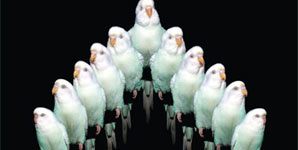 The song itself is made up from a patchwork of different instrumental contributions: besides the brilliant bass, there are understated electronic beats, Space Invader synths, darting strings, short bursts of guitar, and what sounds like scat-singing filtered through a talk box. Despite this, the music never sounds overly busy or chaotic. The bass ties things together and provides a stage on which the other instruments can perform. The results are elegantly funky and eminently danceable.

It is a credit to Ratatat's songwriting skill that they are able to weave the disparate elements which make up 'Neckbrace' into something elegant and coherent. The New York duo have had plenty of time to perfect their craft, having spent the years since their self-titled 2004 debut successfully creating this sort of rock-inflected dance music. Long term fans of the band will know more or less what to expect from the song, especially as it's drawn from an album originally released nearly seven months ago. Familiarity should not, however, breed contempt, and for anyone unfamiliar with the group it's a classy introduction to their aesthetic.

This disc also includes a Hyetal remix of the original song. It takes proceedings in a wholly new direction, abandoning the original's subtlety (and, rather bravely, its bassline) in favour of a more energetic, hands-in-the-air affair built around hard hitting beats. It does what a good remix should do, radically deconstructing the track and showing it in a new light, and it complements the excellent original nicely.