Ray J's Rep: 'There Is No Whitney Sex Tape' 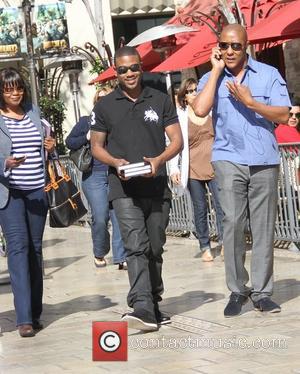 A representative for singer Ray J has slammed reports suggesting the R&B star is in possession of an explicit sex tape featuring his on/off girlfriend Whitney Houston, insisting the footage does not exist.
Sources have told editors at America's Star magazine the One Wish singer, who notoriously filmed a lovemaking session with his ex-girlfriend Kim Kardashian, documented his trysts with Houston on camera and now has a stash of X-rated photos and videos of the late soul legend in the bedroom.
The tabloid suggests a member of the Houston family has since reached out to Ray J, begging him to keep the material under wraps following the singer's death last month (Feb12).
A source says, "(The Houstons have) been in contact with Ray and told him they do not want any photos or videos painting her in a bad light to come out."
But Ray J's spokesperson has been quick to respond to the false story.
A statement issued to Tmz.com on Wednesday (21Mar12) reads: "The despicable tabloid report released today claiming the existence of a sex tape between Ray J and Whitney Houston is not true... There is no sex tape."
Kardashian shot to fame and immediately became a pin-up when her raunchy sex tape with Ray J leaked in 2007. The socialite-turned-reality TV star sued over the footage, which was shot in 2003, and reached a $5 million (£3.13 million) settlement with Vivid Entertainment bosses, who had obtained and released the video under the title Kim Kardashian: Superstar.